To tell you the truth, we were tempted to give up Gnome 3 altogether (even more so as we already had Calculate Utilities 3 to work upon): it seemed too bizarre. But Gnome 3 is beautiful. Its simply elegant and yet more Mac-like design has all to please you. And no iTunes, remember

You can now judge for yourself if we’ve done a good job: 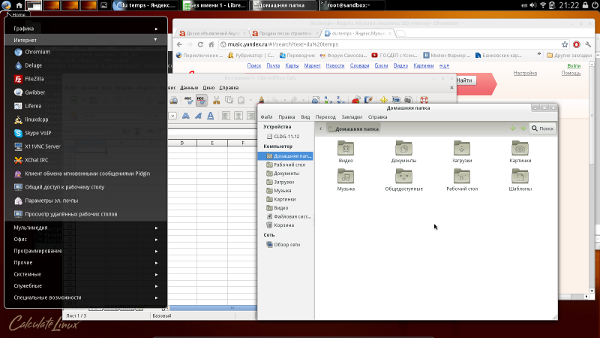 Well - here’s the very same environment we described in our User Guide, isn’t it? The panels are black (nobody seemed to like this on KDE 4 when it was first released, but everyone seems to like it now). We have redone the menu so that it wouldn’t display multiple open tabs. Then, on the top panel, from the left to the rignt, you’ve got quick access directories (Share and FTP will be added for domain users), the desktop switcher (drag-and-drop gestures are supported), the Iconify button, buttons for all opened windows on the current desktop, the system tray, the clock, the screen locking button (pushing ScreenLock on your keyboard does the same) and the Shutdown button.

On the picture below, Nautilus, LibreOffice, Chromium and the terminal are running: 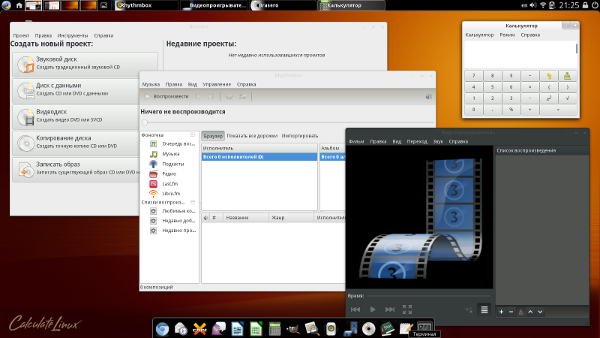 As you can see, the bottom “launch panel” has remained where it belongs on a Calculate desktop. I confess it took pains to make the panel work correctly, but the result seems rather nice.

Has my system become less responsive with Gnome 3? I’ve never believed in speed tests; I guess it has not. Well, the new Gnome might actually run slower on netbooks, but not dramatically so.

At this time, you’re probably asking yourself: should I or should I not update my Gnome from version 2 to 3 now? Of course you should, if you ask me! Since all flavours of Calculate Linux Desktop are designed in the same visual way, switching from one desktop environment to another will be as easy as falling off a log.

As soon as all binary packages are updated, new stage images will be available for CLDG. And once we’ve finished with testing them, a new stable version will be released, so keep checking back.