Is it possible to make a Live USB persistent?

I read a topic that said it would be done for version 13.

Allow me to clarify my question further.

If I add packages, or make any other changes, whilst using Calculate as a Live USB, can those changes be saved so that the next time I use the Live USB I do not have to make the same changes again?

Also, whilst I think of it, if GRUB is corrupted in any way during the installation to a Hard Drive, what do you recommend as the best procedure to follow to resolve the problem?

And one more thing, how do you add line breaks to the forum editor so that there are blank lines between paragraphs?

Utilities system assembly Calculate 3.4, came out with a new release Calculate Linux have been completely rewritten:

To recover Grub, you can use the utility ‘cl-setup-boot’ or graphical console:

Blank lines in the forum are combined into one. Now we no longer make corrections to the site, instead working on a new version of the site. 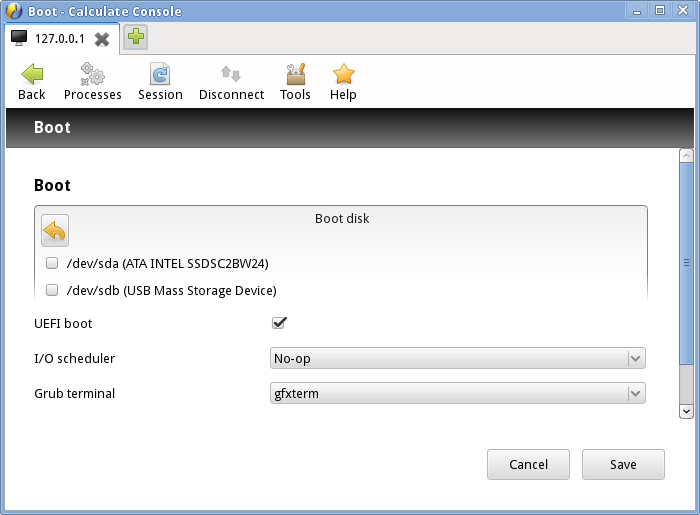 Which distribution do you load a LiveUSB? Can you change the theme and can not see the font from a Calculate Console? Can you make a screenshot?

Section Builder from the Calculate Console works including LiveUSB. In Unetbootin not necessary. Calculate Linux 15 supports booting from a created or copied to your ISO image.

For xfce4-battery-plugin is better to have a separate topic.

Tag “pre” is better not to use for normal text. The time will come and we will launch a new version of the site, which will take into account your wishes.

I forgot to mention that it is the XFCE version.

Which theme do you suggest I try?

Take a screenshot to see the problem with displaying Calculate Console.

Take a screenshot to see the problem with displaying Calculate Console.

Sorry for the late response.

I discovered that if I allow the resolution used by the GRUB menu, of the Live USB, to be the default (auto) selection, then, Calculate Console was displayed correctly.