A Matrix chat server has been launched for Calculate Linux users

Choosing a communication platform is both an important and difficult task. IRC would seem to be ideal for this purpose as it provides good functionality, ensures reliable spam protection and does not require a registration. All Live Calculate CDs/DVDs still do come with a pre-configured IRC client, but the number of IRC users has been declining significantly as social networks became widely used.

Social networking has undoubtedly expanded the community, but has not brought people together. IRC gurus, typically, would not ever use VKontakte, not even for voting. Then we tried Telegram, which came out almost as popular as Vkontakte, at least among Russian users, but its growth also reached its limits. The French-speaking community previously based on IRC, among which some members of social networks, moved to Telegram. As a result, supporting newcomers who launched the system from a LiveCD became even more problematic. We are wondering now whether the IRC client should be removed from the distribution.

All of these ways of communication had a major disadvantage as they were not integrated with the Calculate site, while people registered there form the largest community of users. That is why we tried to set up our own Jabber server, that would be site-integrated. The test period lasted longer than expected because of gaps in Jabber functionality. Among the obvious difficulties were the limited number of clients meeting our needs in terms of functionality, the lack of a decent iOS client, and indeed problems with message delivery when using multiple messengers.

The news about the KDE community moving to Matrix felt like a solution. The tests showed positive results, too. Good news was the possibility of transparent integration with IRC, as Matrix users are allowed to read and write to IRC users and the vice versa. It is as if we were going back to where we had started, boosting IRC chat rooms to meet people who have been involved with the Calculate project for years.

The Matrix client currently recommended for Calculate Linux is Riot. Simply install it: 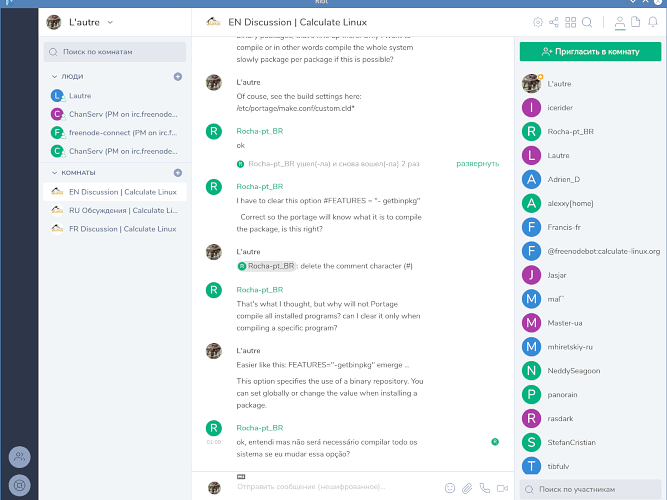 Riot is available for Android and iOS, too.

To get the login details, go to your user page on the new site, activate Matrix and set a password for your account. Now specify your login, password and connection server when prompted for by Riot:

calculate-linux.org is integrated with the federation, which means that you will be able to contact not only community members, but far beyond it. The configuration and startup of a Matrix server under Calculate Linux is fully documented. We also provide a guide to setting up bridges from Matrix to other messaging services.

Meet you on Matrix!